Posted on May 28, 2015 | Leave a comment
“In Conversation with Anthony Clark” will be held on Wednesday June 10, from 6:00-7:30 PM. The event will be held at the Tamiment Library (Tenth Floor, 70 Washington Square South). A former speechwriter and legislative director in the U.S. House of Representatives, Clark will be discussing his new book on the nation’s presidential library system, The Last Campaign: How Presidents Rewrite History, Run for Posterity & Enshrine Their Legacies.
Timothy Naftali, Head of the Tamiment Library & Robert F. Wagner Labor Archives, will serve as the moderator. Copies of the book will be on sale before and after the discussion.
The event is cosponsored by both the Tamiment Library and the Center for the United States and the Cold War.
RSVP to rsvp.bobst[at]nyu.edu with guest name(s) and title/date of the event. 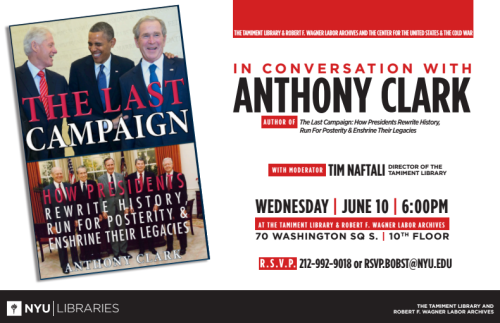