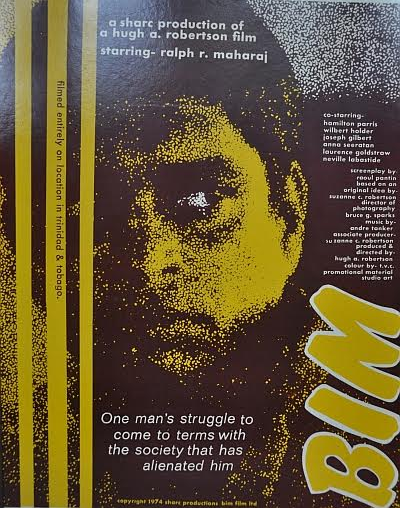 Those in the know may know about Bim, but very few of them have seen Bim. Imagine that The Godfather hooked up with The Harder They Come in early-1970s Trinidad. The bastard child would be Bim – the film that Hugh Robertson (who edited Midnight Cowboy) made on this island in the southern Caribbean in 1974. Working in a country with little support for filmmakers, Robertson created a fierce piece of cinema whose style evokes the American New Wave, but whose rhythms and whose story – Bim charts the rise and fall of an Indo-Trinidadian man who gets into a life of crime, only to end up in politics and as part of his island’s movement for Independence – are 100% Trini.
There are said to be only two prints of the film surviving. And a few scratchy DVD copies made from film-to-VHS dirty-transfers. Yet what still remains is a landmark of Caribbean film: a raw vision off Trinidad’s Indo-Caribbean culture that doubles as a vital portrait of how conflicts over identity – in a New World nation that V.S. Naipaul infamously dubbed “a half-made society” – play out on the ground.
—
IAN HARNARINE teaches at NYU’s Graduate Film School and the Department of Physics. His film Doubles With Slight Pepper, Executive Produced by Spike Lee, won the Toronto International Film Festival and the Canadian Academy Award.
JOSHUA JELLY-SCHAPIRO is the author of Island People: The Caribbean and the World, and the co-editor, with Rebecca Solnit, of Nonstop Metropolis. He is a Visiting Scholar at NYU’s Institute for Public Knowledge.
—
QUERIES: ss162[at]nyu.edu